to trigger off camera flashes. If you have done your research, you all ready know they have a great reputation and there price is very reasonable. You may also know that the Pocket Wizard is almost always the choice of pro photographers. As I have mentioned, I have used the Cactus v5’s to trigger remote flashes and they have always proved very reliable. 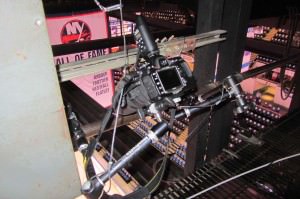 Camera mounted in rafters above the ice. Note the steel safety cables connected to everything!

Recently though I need to trigger a remote camera from a considerable distance. The camera was to be placed in the rafters of a stadium that houses a pro NHL ice hockey team during the playoffs. I knew that the Cactus v5 could be used as a remote camera trigger.  Not wanting to miss a shot during the playoffs I started researching what I would need. The only thing I required was a sync cable. I ordered it and within a few days began my testing.

The Cactus v5 proved reliable as a camera trigger for single shots and seemed to work well at long distance. The rated distance of the v5 is 300 feet but many people have used them as far as 1600 feet. Since Ice Hockey moves at incredibly fast speeds I knew I would be taking rapid fire shots. I began testing the v5 with rapid fire burst. While the v5 was able to keep up (kind of) I encountered a problem with my Nikon D3S and the v5. To fire the camera you need only press the button on the transmitting remote and hold it. The camera begins firing at once. If the cameras buffer has not filled up, simply release the button and the camera stops shooting. You would think the same holds true when the cameras buffer has filled up. Unfortunately, this proved not to be true. Once the camera buffer filled up and shooting in the camera slowed, releasing the remote trigger did not stop the camera from shooting. It was almost like the Cactus had buffered commands to the remote camera. The camera continued to fire for several seconds after releasing the trigger on the remote, thus keeping the buffer from freeing up. Obviously this was no good, hockey moves to fast to risk this. I needed a remote that would start and stop shooting at my command, regardless of the state of the camera buffer.

. The rated distance of the Pocket Wizard III’s is 1600 feet. This gave me piece of mind (although the v5 probably would have worked). When test firing the remote camera with the Pocket Wizards the camera fired upon command. This is accomplished by pressing the test button on the front of the transmitting remote.  When triggering the remote camera long enough to fill up the buffer, the camera immediately stopped shooting when I released the trigger button on the remote. The Pocket Wizard did not “buffer” commands to send to the camera. Obviously, this is the preferred method of shooting for my situation.

The other main advantage of using Pocket Wizard’s for triggering remotes for a professional sports event is that every other sports photographer is using them too. This means that when choosing a channel to shoot on you can co-ordinate with the team rep and secure a channel just for your equipment (there are 17 channels). This way you do not trigger another photographers equipment and vice-verse. I do not believe a Cactus V5 could trigger a Pocket Wizard III by accident but I would not want to find out the hard way. If you are looking for a cheaper alternative to the Pocket Wizard III, the new PocketWizard Plus X Radio Trigger

has most of the important features of the III’s but at for a lower price (currently under $100). Just keep in mind the the X’s only have 10 channels and they are the same channels as the III’s so the 7 extra channels may be important to a sports photographer at a large event.

If you feel this article is helpful please support the blogger by using the links to products in this article or the link below: 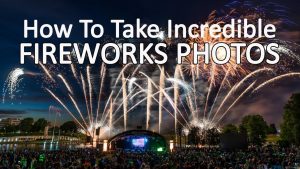 How to Take Fireworks Photos Perfectly Every Time

If you want incredible fireworks photos there are just a few basic rules you need to follow. With the camera … 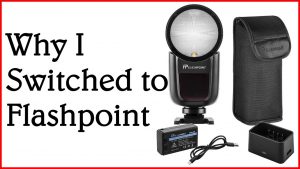 Why I switched to Godox V1 / Flashpoint X R2

15 views•Jun 28, 2020 Over the years I tried a variety of different flash systems. I toyed with Yongnuo, then … 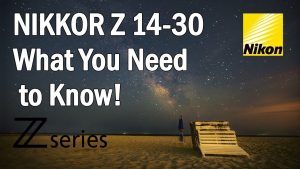